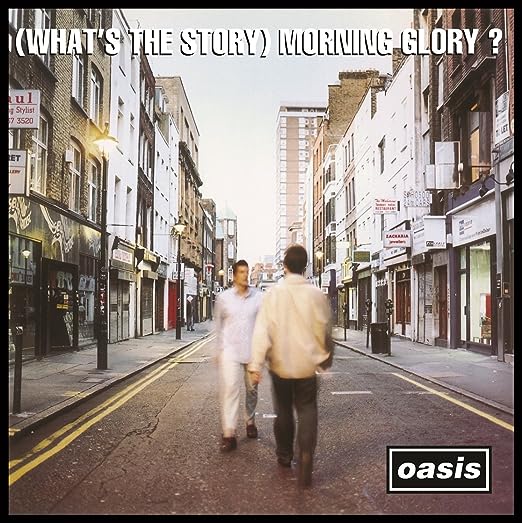 Nothing will bring you back to summer camp in the 1990s faster than hitting play on this second studio album by English rock group Oasis. (What’s the Story) Morning Glory? earned the band and its perpetually feuding brothers Noel and Liam Gallagher widespread recognition and radio airplay. The album coincided with the cultural moment dubbed “Cool Britannia” in the mid-1990s in which British bands like Oasis, Blur, and the Spice Girls exported a message of British poshness to an eager international audience.

The album was recorded in 1995 between March and May in Rockfield Studios in Monmouth, Wales. It was produced by Noel Gallagher and Owen Morris, a British record producer who mixed and mastered the first Oasis album Definitely Maybe and also worked with The Verve. (What’s the Story) Morning Glory? was released in October 1995 and sold a record 347,000 copies during its first week of sales. It went on to become the fifth best-selling album in UK chart history.

Propelled by huge singles like “Wonderwall”, “Don’t Look Back in Anger”, and “Champagne Supernova”, the album was a near-instant chart-topper and climbed as high as number four on the US Billboard 200. The album took Best British Album at the 1996 Brit Awards and is widely considered as a defining album of the Britpop era. (What’s the Story) Morning Glory? has sold over 22 million individual albums worldwide and inspired millions more to learn how to play the acoustic guitar. Today, it is still being recognized for the role it played in bringing independent rock to the masses: in 2010 (What’s the Story) was named the greatest British album since 1980 at the Brit Awards.